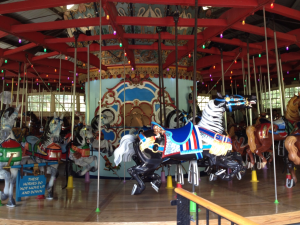 Picture it, a small child holding her father’s hand, walking through a carnival.  Everywhere she turns there are distractions and attractions. Yet, in that clamor and chaos, would this child dare release her hand from his?  To do so, might just end in becoming separated, and finally lost. Instinctively, the child’s grip tightens, rather than loosens, doesn’t it?

Now, suddenly she comes upon the carousel, and looks up into her father’s eyes and asks with a little trepidation, ‘just one ride?’  The father fidgets in his pocket and produces a ticket, enough for the child’s request.  He places her on the horse, straps her in, and then kisses her cheek.  ‘I will be right here the whole time.  Look for me as you come around.’ She nods her head, and the ride begins, but fear tightens her hold on the pole, as up and down and around she whirls.  Her only thought is her father’s face as he retreats to rear. One last strain of the neck, and then gone.  So, she waits anxiously until he comes into view.  Yes, he’s right where he said he would be.  Her eyes lock on his, and they are united, though worlds apart.  Her heart rests a little now as she whirls by, gaining the courage to release her one hand and lift it to wave.  The father never takes his eyes off of her.  In that gaze, love builds faith to believe, and then to enjoy the ride.

Our calling in the mission is like that carousel.  The Father wants his children to enjoy it under his terms, and under his watch.   So, we mount the steed, grip the pole, and stare at our father, who is smiling, happy for his child to know his purpose for them. He brought us through the carnival, past the booths of hucksters, the enticing aromas, the house of mirrors and the haunted mansion. Now he kisses our cheek and tells us, “I will be here, right here, look for me.”   We are disoriented and a little anxious until the first time we whirl around and see Him, smiling and waving.

That moment, that mystical enamoring second of time captures what it means to be at rest. You are flying a mile a minute, but your eyes are locked immovably on His.  Each time you come around, it’s as though it was the first time. God it is not affected by the law of diminishing returns.  Love builds because trust has been tested and found immovable.  When our eyes lock, He transmits faith into our hearts, and that moment has no rival in human experience.   He is training our senses to hold the gaze, trust the ride and long for the Hand He will stretch out   when the carousel stops.