I want to die young, at a ripe old age.

I want to always take new ground, risk new ministry ideas, sow seeds into personal pursuits, and search for creative ways to bring the gospel into our culture. But honestly, it’s not an easy assignment. By natural affect, life tightens around you, constricting interests, suffocating a willingness to try new things.

That’s why I need re-invention. I think we all do.

When I was in my mid forties, I played a round of golf with an old codger who had squeezed a lot out of life. Now he was enjoying an afterglow—that beautiful season where an individual has passed through life stages, into a place where others pursue them to sound the depths of their wisdom. We were on the 12th tee when he paused, turned back and asked me, “You want to know the secret to finishing well?” Then he crushed the ball, a soaring shot down the edge of the tree line. He snatched up his tee and headed for the golf cart.  My shot landed in the woods. It took him two more holes to get around to his answer, which I summarize:

“A person who leaves their forties without re-inventing themselves, will most likely spend their fifties losing ground to their dreams. By the time sixty comes around, they’ll be coasting, instead of making them the best years of their life.”

Augustine said a similar thing, but with a twist: “Living well depends on the re-ordering of our loves.”

Jesus’ command to love Him, and our neighbor, tests our heart at the deepest level. In doing so, in approving love in us, He re-invents our experiences, and ultimately re-orders our priorities, or better put our loves. That’s what keeps our relationship with God from growing stale, or predictable; and what leads to re-invention.

Early in my Christian life, God told me something that I’ve never forgotten. He said, “I want you to move in the direction of your greatest fear.” It had to do with my speech impediment, which I used to excuse myself from obedience, for fear of looking foolish. That phrase became my mantra, which in turn became a conviction. Along the way, the words of Francis Fenelon strengthened me; “there is only one way to love God, to take not a single step without Him, and to follow with a brave heart wherever He leads.”

Initially, He led me to Himself, and into transforming devotional moments where I scribbled action items into my journal, and then by faith got to work. When God re-ordered my well-ordered life, ‘scrambled the eggs,’ so to speak, that’s when I began re-invention. But it didn’t become transformational, until He led me into the second part of His command; ‘to love your neighbor as yourself.’ That always seemed to involve moving in obedience toward what put a lump in my throat. He tested my heart, by leading me to walk with others through the tests of their lives. 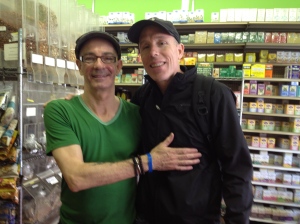 About five years ago, I ran into Jac, from France, on a subway platform in NYC. We rode uptown together because he needed help finding his way. When he handed me his card, I never imagined it would be the beginning of a friendship. I’ve gone to bat for him with the Mayor’s office, re-written his scratchy English for numerous proposals in the art world, and then listened as he told me with sadness it was rejected, over and over again. One day I asked him about his love life, and he said, “I’ve had three loves in my life, two women and one man.” I wouldn’t have guessed, yet I smiled and asked him to tell me more. When we greet he kisses my check, as the French often do. He loves Ginnette, and I have had many chances to share with him God’s love. His world is impossibly different from my own, our values collide, yet God sits as friend between us. He wants Jac, a famous fashion designer, turned fledgling artist, to experience the kind of love, Jesus died to bring to the world.

No one grows old, who gives their heart to God, for Him to test through the tests of other’s lives.

What phrase does God need to whisper, to keep you younger than your years?